Sharks are highly developed animals with one of the most extended documented adaptation periods in geological history.

On some levels, this makes them very predictable. Sharks are drawn to a lot of things. They usually locate and predictably attack their victim.

Many of us often read the sensationalized stories of sharks attacking kayaks. Although these instances aren’t as common as many people believe, they do happen.

While kayakers may find data to facilitate them defend themselves from shark attacks, there is little understanding of why sharks attack kayaks or what color kayaks attract sharks. 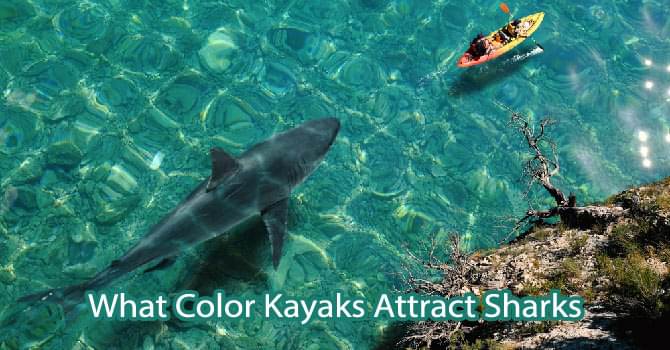 Why Do Sharks Attack Kayaks?

Even as the number of incidents appears to have increased over time, the proportion has not. It’s just that recreational water sports are far more prominent than ever before.

Sharks do strike kayaks, even though they are far rarer than most people believe. They occasionally confuse the kayak for food.

When sharks attack, they are not attempting to remove the kayaker so that they may eat them. They are really inspecting the vessel to see if it contains anything edible.

As a result, they are gazing up for the black shadows of their meal against the pale blue of the sea surface. Kayaks, which have the same general outline or shape in the waters as an elephant seal, are thus an attractive prey for them.

Kayaks in black, dark gray, and deep green must resemble elephant seals to white sharks. As a result, we recommend that you avoid using certain hues.

Darker kayaks are more likely to provoke a pummeling attack from below, the characteristic white shark hunting behavior.

Dark colors work well with mako sharks on surface jigs. These colors create the clearest silhouettes or throw the best shadows, and those are the clearest for makos to notice while they are hovering deep, gazing up for food on the surface, a hunting habit that white sharks mimic.

Brighter colors may be less likely to elicit a predatory attack from sharks. They are considerably more likely to provoke probing or foraging action, in which a shark hovering near the surface pops up and nibbles on the kayak to check whether it contains anything appetizing.

Sharks seek prey, but they are adaptive and will consume other items, such as dead animals.

Finally, it comes down to transparency. What is visible due to solid contrast is the most susceptible to being targeted or explored for scavenging.

Red is dark enough to elicit a predatory reaction in sharks, but it is also warm enough to produce an inquisitive response in sharks gliding close to the surface. That is why we recommend against using a red kayak for saltwater fishing.

What Color Kayaks Are Safe From Shark Attacks?

A white kayak is significantly less likely to get attacked from underneath in an eating-type assault, while a blue kayak will be the slightest danger from sharks that are not hunting instead of swimming in shallow water.

If you wanted to go with a solid hue, pale blue might be an excellent option. However, the most fabulous color pattern for shark attack avoidance is a white kayak with blue sides.

Colors are added to plastic kayaks as a marketing ploy to give customers more options, and bold colors are convenient for users to spot on the water if they lose their kayak or get into difficulty.

That being said, the hues we see now will not last long. There aren’t many yellow, red, or pink kayaks out there.

Sharks do not really attack the kayaker, and no casualties are suffered. Most shark attacks are best classified as shark sightings.

But, genuine shark attacks do occur, and kayakers should never be complacent in the presence of these animals.

Sharks are highly deadly, and if you tumble off your kayak into the ocean, you risk being eaten by one.

Even if you’re fortunate and the shark learns you’re not prey, you might lose a limb. As a result, you should take measures.

Whenever a shark strikes a kayak and deaths ensue, the shark mistook the kayak and the people aboard for prey.

Human meat and blood is not a delicious feast for a shark. They enjoy eating from saltwater aquatic life over food from soil-based creatures, even people.

How To Deal With A Shark Attack While Kayaking?

Like most dangerous circumstances, it’s critical to remain calm and prevent any impulsive behavior that might endanger your life. So keep these tips in mind if you encounter a shark while kayaking:

Remember that sharks are predators of chance and would always want to stay concealed.

Merely noticing a shark does not guarantee that it intends to attack you; it might have shown itself by accident or is simply inquisitive. When you are attacked by a shark, you are unlikely to notice it coming.

If you see any dead marine creatures floating in the water, evacuate the area immediately. A shark may attack to secure its prey or if it perceives you to be a threat.

Take the paddle and smack it on the kayak’s deck to demonstrate to the shark that you are not food.

Never engage a shark that is feasting. If a shark has killed or is eating something close to you, paddle quickly but quietly and get at least 100 feet away from the feeding area.

If you see a deceased mammal in the water, such as a sea lion, depart the place right away. If a shark perceives you as a challenge, it will protect its food.

If a shark approaches your kayak, avoid slapping it since it may be lopping out of curiosity. While the slapping is unlikely to frighten the shark away, it is more likely to trigger an attack.

If a shark nibbles your kayak, you should strike it with your paddle as a last measure as it may irritate the shark.

It’s conceivable that it mistook it for food and will let it go once it learns it doesn’t feel edible. You’ll be able to tell the difference between a curious nip and a proper aggressive attack.

If you wind up in the water, attempt to swim gently towards the beach without thrashing too much.

If the beach is a long distance away and there are no other kayaks or vessels nearby, you should swim for a while and allow the shark to depart before returning to your craft.

Shark attacks on kayaks may not seem as dangerous as you think. But that doesn’t mean you can be ignorant. There are more shark encounters than attacks, but it’s still risky.

Yes, it would be much safer to go kayaking in shark-free areas, but the odds of being attacked by a shark are considerably lower than the odds of getting in a traffic accident.

Pick your kayak in the safest colors possible to avoid attracting sharks. If you do encounter one, keep the mentioned tips in mind, and you should be safe.

We hope now you know what color kayaks attract sharks and you’ll be safer in the ocean than before. Happy kayaking!