Are Inflatable Kayaks Safe In Florida? Complete Overview For Florida

You may be extremely frightened to paddle your kayak, sit only inches over the water, and watch large alligators gazing back. This is what films are made of.

But we all feel a bit adventurous at times, and it may be fascinating to paddle the southern marsh and swamps. Every year there are thousands of kayaks paddling through the water bodies of Florida?

You can take inflatable kayaks on flat water, on rivers, or even out into the ocean. Although not suited for all conditions, they are often unbelievably well-designed and fantastic for beginners to expert passengers.

Some Things You Need To Know About Inflatable Kayaks 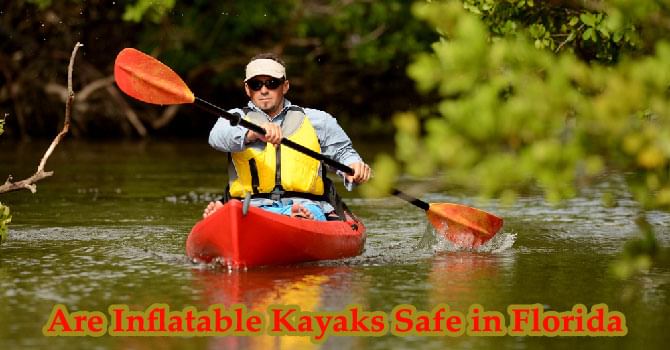 Sitting in a kayak will feel somewhat less steady than a typical boat, but they will still provide some support.

Inflatable kayaks do not consist of only one layer of thin material, unlike basic pool boats or toys. Some inflatable kayaks use metal components to provide structure and durability.

They consist of several layers of hard, durable, thick-coated materials, such as vinyl and polyester. The materials are so strong that they can take a blow.

You should not worry about harming it, whether you paddle through rocky waterways or wear city shoes while you’re riding these inflatable kayaks.

Punctures are uncommon in inflatable kayaks due to their rugged construction. These boats’ exteriors are very robust, thanks to modern technology and materials.

Brushing up against rocks and tree branches has no adverse consequences. Of course, there are exceptions to this rule.

But you’ll puncture it if you are persistent. Seams might split apart, allowing air to escape, or a sharp pebble struck precisely the right way can puncture your boat.

Is It Safe To Ride In Inflatable Kayaks In Florida?

However, the main question that arises is whether these inflatable kayaks are safe for the water bodies of Florida.

Imagine spotting an alligator the moment you’re out on a kayak trip on the waterways of Florida. Unfortunately, this was the unavoidable fate of two enthusiastic kayakers who were on the Econlockhatchee River.

The alligator was successful in flipping over the kayak of the boaters, and initially, the ones on the kayak went missing after the mishap. They were rescued after a successful search operation.

Although it’s not a very wise decision to be on the same waters that alligators call home, it is not a very dangerous choice either.

Incidents of spotting alligators when you are out on a kayak trip are widespread in Florida since Florida is the home to a large number of swamps. Isolated incidents where you land yourself in trouble because of alligators rarely happen in Florida.

Unless you were born and brought up in the swamps and are familiar with alligator habits, most people are unaware that large alligators pose minimal risk to kayakers.

Alligators lounging on the bank will likely remain there and watch you paddle past as long as you are paddling well-traveled paths. They will most likely stay put if they are immobile in the water.

Alligators sitting on the bank will rapidly slip into the water, whereas alligators floating stationary on the water’s surface will sink if you come too close.

While being able to see them makes you feel better, retreating beneath the surface is not an unfriendly attitude. Instead, it’s a “flight” mechanism by the alligators designed to keep you from getting into a fight.

While most alligators will avoid a fight, there are seasons of the year and certain circumstances when extra care is warranted.

Things To Consider About Inflatable Kayaks

It’s essential to consider the stability and rigidity of the inflatable kayak before venturing out on the waters of Florida.

Once inflatable kayaks are completely inflated, you’ll be astonished at how powerful and stiff they can be.

However, the most important thing is to make sure your kayak is properly inflated. A kayak that is under-inflated will not be steady and will be difficult to keep afloat.

The majority of inflatable kayaks include either tiny inflated portions that function as rods or a metal structure built into the boat. In the boat, both of these approaches serve as stiff stabilizers.

As you paddle, the kayaks will be straight and steady due to these added features. When the kayaks are filled, they become extremely stiff. They often offer the same feeling as ordinary hard-hulled kayaks.

Inflatable kayaks are extremely buoyant, which is one of their best features. If you’ve ever capsized in a traditional hard-shell kayak, you know how difficult it is to empty the water and ride it again.

Inflatable kayaks have the advantage of being able to glide even if they capsize since they are filled with air. Their low weight also makes it easy to empty any water that may have accumulated within.

It’s important to know that while a hard-plastic kayak may not make you invincible to an alligator attack, it sure does provide a level of protection.

It’s also important to be cautious of the surroundings and undertake certain safety precautions when riding on the waterways of Florida.

Inflatable kayaks are becoming more robust, but they are still not indestructible. To be safe on the water, you’ll need to take the same precautions you would undertake in any kayak.

Inflatable kayaks are not designed for rough waterways or severe circumstances.

If you’re kayaking on a river with waves and debris, use great care. You’ll want to keep clear from any situations that might put you or your boat in danger.

It’s important to remember that inflatable kayaks are quite light. This makes them vulnerable to being influenced by strong tidal currents. Make sure you’re not paddling in bad weather.

As a general guideline, you should never kayak alone or without informing others of your whereabouts.

Comparison Of Inflatable Kayaks And Regular Ones

Another vital thing to consider is the comparison between inflatable kayaks and regular ones. Rigidity is one of the key factors.

Not only that, but having the right keel and bow shape also has an impact on performance. Inflatable technology has progressed in significant strides in this area over time.

A decent inflatable kayak would never surpass a high-performance conventional kayak, to be truthful. That kind of perfection is simply impossible to achieve.

The ordinary recreational kayaker, on the other hand, will barely notice the difference between a high-quality inflatable kayak and a standard conventional kayak.

Extra protection against a rip or puncture is provided by the two or three layers of cloth. A wayward stick could pierce one layer, but the other layer will prevent an object from puncturing the kayak completely.

Separate inflating chambers ensure that if a puncture or rip occurs in one section of your kayak, it will only affect that chamber.

You’ll have two or three additional chambers that aren’t impacted, allowing you to remain afloat long enough to travel to land and fix it or seek assistance.

Some inflatable kayaks are constructed with the same materials and manufacturing techniques used in military equipment.

Inflatable kayaks are mostly just as stable as traditional kayaks. If you consider inflatables in the same way that you would a rigid whitewater raft, you’ll see that even inflatable kayaks have some heaviness and toughness.

Inflatable kayaks are just as secure and simple to operate as any other kayak, thanks to their strong materials, sturdy structure, and comfortable seats. However, especially in Florida, you should always paddle with caution.

Even though issues like leaks and scratches are rare, they can nevertheless occur. Don’t expect your kayak to be impervious to harm.