Surf-Ski Vs Kayak – Which One Is Better?

Surf-ski vs. Kayak – the popular and rather “confusing” topic in kayaking. You may also be here being confused to know which one is better among them, right.

Surf-ski and Kayak are both used in kayaking for similar purposes. But there are differences between them in designs and usages.

Both are individually good at kayaking. But sometimes, the weather, place, and usage make one of them individually better.

That is why you need to know what they are and the differences between them before choosing Surf-ski or Kayak.

In this guide, we will share what’s the differences between Surf-ski and Kayak, and which one can be suitable for you. So stick with us and choose the better one for your kayaking journey!

Surf-ski Vs Kayak – What Are These? 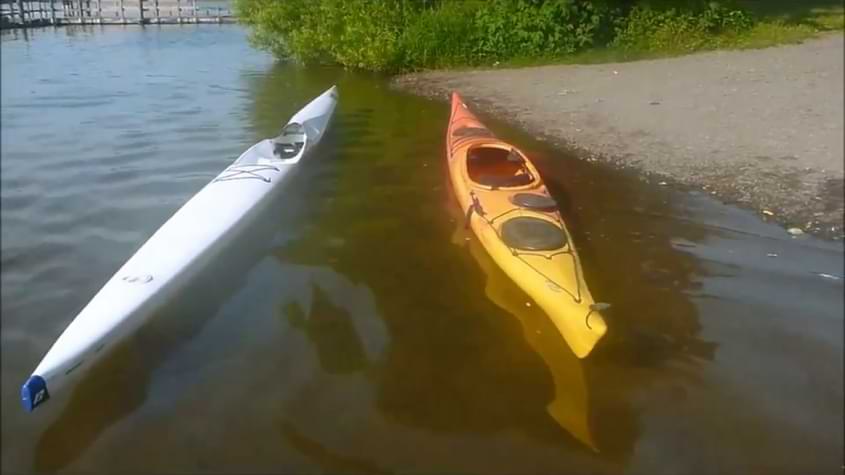 There are some confusions between Surf ski and Kayak. Surf-ski is one kind of Kayak, but it has some differences. We will show you what those differences are.

But before that, let’s know about them shortly –

Kayak is a paddling craft that is used for a variety of kayaking purposes. It is well built and has a good amount of space on it.

There are different kinds of kayaks. Traditional kayaks are used for tours, fishing, surf plays, etc. Some kayaks have a cockpit, and some don’t. The sizes of kayaks vary too.

Kayaks are good for relaxing or tours. The cockpit of kayaks protects from elements. Its cockpit causes the least chance of getting wet.

It has sprayskirts and rolls with the cockpit, keeping you dry and helping you learn kayaking.

Surf-ski is one kind of Kayak in paddling craft. But it is the longest Kayak in the kayaking family. A surf ski can do everything that a traditional kayak can do. But the hulls of the surf ski are narrow, long, and lightweight.

It has super speed and can surf on large waves while kayaking. It is like an upgraded version of Kayak. It has an easier re-entry system than others, and you can climb on it in a few seconds.

To use a surf ski, one needs to sit on the top. You do not need to pump water in a surf ski, and its cockpit will drain water on its own when you start paddling.

Also, you will not get tired because of its speed, and you can reach your destination faster, even in any water.

Its design is very simple and has fewer gears. That is why there is no chance to break anything or be a problem with it.

Most people use surf skis on open water like seas, but you can use them on any water like lake and racing.

Features Of Surf-Ski And Kayak

Now the time for looking at the features on Surf-ski and Kayak. Though they have almost the same features, there are some differences.

It will help to know about these two even more and what they are capable of. Let’s jump on it.

A kayak has a bunch of features. Below are a few of those –

Kayak has a rudder in it, which keeps the Kayak on the right path. It can be controlled by your feet while kayaking.

Almost every Kayak has rudders nowadays, including Surf-ski. Some people use it, and some don’t. You can always leave it if you don’t like it.

Hatches are designed to prevent the water from entering the Kayak. It is fixed with the Kayak. Also, there can be stored small gears like camera cases, bags, etc., easily.

A bulkhead is an inner compartment of a kayak hull. It is an important section that compressed the air and water in the hull. It also helps in floating the Kayak.

There is some storage for small gears. But don’t always be sure that it can protect your gear from getting wet.

There is a seat for one person in every Kayak. You can upgrade it even after prolonged use.

The seat is the one that balances the Kayak. The traditional Kayak has an inner seat. But there are also features for sit in and sit on top.

Surf-ski has the same kind of rudder, which allows it to control movement. But usually, a surf ski doesn’t have any hatches or bulkheads in it.

But you can adjust those later if someone wants. Surf-ski has a seat also, but it is only on the top. It has an open cockpit.

Surf-ski vs Kayak – Advantages and Disadvantages

Surf ski and Kayak both have some advantages and disadvantages. Let’s see those by one.

The Disadvantage Of Traditional Kayak:

Comparison Between Surf Ski And Kayak

Both surf ski and Kayak are good, but you have to consider the place and how you want to use it if you want to compare those two.

Surf skis are always better for racing and open water because of their simple design. Not only that, but it is also incredibly fast, which is much needed in a race.

So if you are a racer or want to be a racer in kayaking, a surf ski will be the best for you. You can practice racing with a surf ski and master it easily. The easy enter and exit system will help you a lot.

But if you are looking for something on which you want to relax or play around, you can go for a kayak for it. Kayaks are made for this.

The closed cockpit will always protect you from getting wet, and the storage system will help you carry your gears. Touring and fishing will be more fun with a kayak.

However, if you want us to decide, we will suggest you go surf ski. It has less risk and can do all of the things that a kayak can do with a limit.

Also, it has more advantages than a kayak, and there are options that you can customize.

1.How Much Does A Surf Ski Cost?

The cost is around $2600 to $4400. It is hard to tell the exact price, cause it depends on the shop. However, this is less expensive than kayaks which require continuous repair and in-progress cost.

Sit-on is better than sit-in because it is easier to enter and exit. Also, a person can easily climb on if the Kayak flipped.

However, if you want to be protected from getting wet, a sit-in will be more suitable in this case.

3.Which One Is Safest?

A surf ski is the safest one because it has a sit-on-top system. This system allows a person to get in and off easily, and it is user-friendly.

Again, sitting on top has a self-draining system built-in, which is more useful.

Well, now we can hope that you know everything about a Surf ski and Kayak. Please don’t get confused about these two because of their similar purpose.

Pro tip, give your comfort more priority than other people’s opinion.